This may be long, but I came upon an old floppy (a floppy!) today, and found the drawing you see here. I'm about to turn 50, so let me spin a tale from when I wasn't even half my current age...

Project Hummingbird
Some friends and I had to build "something" for our engineering senior design course. A friend had a model airplane remote control setup and wanted to play with "ducted fans." We came up with an idea for an aircraft we had a hard time describing to people.
Rather than wings, we were going to generate lift with pure thrust from the ducted fans! It was going to be the prototype for vertical take off and landing craft, and be a darn cool model to fly around.
Today, you can go buy a drone, and fly something similar, but in 1990, this was something no one had seen in radio controlled aircraft.
We had *NO* idea how much we'd bitten off.
To fit our budget constraint, we could only afford two of the ducted fan assemblies and engines. So we had to design a set of ducts to split the two sets of thrust into four so that we could control the craft.
To generate the thrust required, we had to have ducts that were over five inches in diameter. To keep control, we needed the nozzles over 20 inches from the center of the craft. This means that the craft needed to be about a foot high, and nearly four feet across.
Naturally, we designed it as a saucer.
We managed to fabricate one set of ducts, and showed that it generated more thrust than we had calculated. We got prototype control circuits mocked up before we realized we couldn't afford the gyroscopes available at the time. We learned the types of things you're supposed to learn in a senior design course.
But I *still* want to see that thing fly... 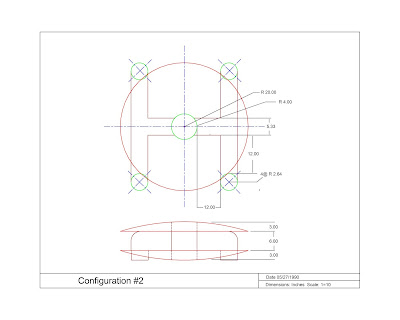 Email ThisBlogThis!Share to TwitterShare to FacebookShare to Pinterest
Labels: JustForFun